New packaging and promotional materials bearing the “OU” symbol will be distributed nationwide over the next few months.

The Orthodox Union rigorously monitors all aspects of production. It supervises the process by which the whisky is created, examines the raw ingredients used to make Glenmorangie and regularly inspects the distilling and bottling facilities to make sure that its standards are met.

“We are very pleased to have Glenmorangie Single Malt Scotch Whisky become the first major single malt scotch brand to attain OU certification. It was also gratifying for OU to guide the Glenmorangie Company through the certification process and bring this famous single malt brand to the growing kosher market place,” remarked Rabbi Eliyahu Safran, OU Kosher Vice President of Communications and Marketing. “It was rewarding for OU Kosher’s team, headed by Rabbi Nachum Rabinowitz and Dr. Avraham Meyer, to collaborate with the Glenmorangie team to bring these renowned products to an ever-growing kosher market place.”

Glenmorangie Original, is bottled at a strength of 43% ABV and chill-filtered, to enhance the smooth but complex flavors. It is aged for a minimum of ten years in superior quality American White Oak ex-bourbon barrels, made from forests carefully and sustainably managed for the Glenmorangie Company. These casks are filled with the Glenmorangie spirit, distilled to an unparalleled level of complexity, aroma and smoothness in the tallest copper-pot stills in all of Scotland. The result is a smooth yet complex malt whisky, revered and rewarded across the globe for generations. Glenmorangie Original consistently outscores its direct competition, scoring 94 points for the past 6 years in “The Whisky Bible”. Jim Murray, the author of the Whisky Bible and world renowned whisky expert describes Glenmorangie Original as “Complexity at its most complex.”

Glenmorangie Astar, is one of the newest expressions from the famed Glenmorangie Distillery, and is the first whisky in the world to be matured in ‘designer casks’ sourced from selected, air seasoned, slow-growth American white oak.

The creation of Astar began in 1985 and is the brainchild of Dr. Bill Lumsden, Glenmorangie’s Head of Distilling and Whisky Creation. The wood used to mature the whisky is carefully selected, slow-growth, fine-grained American white oak, found specifically in the Ozark Mountains of Missouri. The wooden ‘staves’ crafted from the oak is left in the open air to season for at least 24 months. This long wait, coupled with the wood’s inherent porosity, allows the white oak wood to breath and soften, adding the first elements of flavor that will contribute to the final spirit. The staves are ‘coopered’ into oak casks and toasted to contribute further flavors of almond and coconut. The casks are then filled with Tennessee whiskey and set aside to mature for four years, smoothing out any rawness in the wood, and at the same time releasing luscious undertones of vanilla.

These ‘designer casks’ are then ready to be emptied and shipped to the Glenmorangie Distillery in Tain, to be filled with Glenmorangie’s renowned, delicate and complex spirit, uniquely derived from Scotland’s tallest stills. The casks are finally laid down for many years in dark, cool, earth-floored warehouses for a long, slow maturation. Glenmorangie Astar is bottled at 114.2 proof, 57.1% ABV which represents the whisky in its most natural form, and allows the drinker to explore the fullest spectrum of aroma, texture and flavors.

Dr. Bill Lumsden comments:
“At Glenmorangie we are particular. We believe up to 60% of the flavor of the whisky comes from the wood and our quest for the very best wood is unparalleled. It is difficult to sum up years of passion and commitment! But I would describe Glenmorangie Astar as everything a single malt should be – it is the result of an incredible journey: the pursuit of perfection.”

Glenmorangie originates in the Scottish Highlands where, at the Glenmorangie Distillery, it is distilled in the tallest malt whisky stills in Scotland, expertly matured in the finest oak casks, and perfected by the 16 Men of Tain. The distillery was founded in 1843 and is renowned as a pioneer in its fields, uniting tradition with innovation. Most recently, at the 2010 San Francisco World Spirits Competition, Glenmorangie was awarded the prestigious title of ‘Distillery of the Year’.

Today, the company is one of the most renowned and innovative distillers and marketers of Scotch whisky brands worldwide and is part of Moët Hennessy, the wine and spirits division of Moët Hennessy Louis Vuitton (LVMH). Headquartered near Edinburgh, Scotland, the company produces two main single malt brands – Glenmorangie Single Highland Malt Whisky and Ardbeg Single Islay Malt.

ABOUT THE ORTHODOX UNION

The Orthodox Union, now in its second century of service to the Jewish community of North America and beyond, represents the fastest growing segment in Jewish life. The OU is a world leader in community and synagogue services, adult education, youth work through NCSY, political action through the IPA (Institute of Public Affairs), and advocacy for persons with disabilities through Yachad and Our Way. Its kosher certification label, the OU, is the world’s most recognized kosher symbol and can be found on over 400,000 products manufactured in 80 countries around the globe. 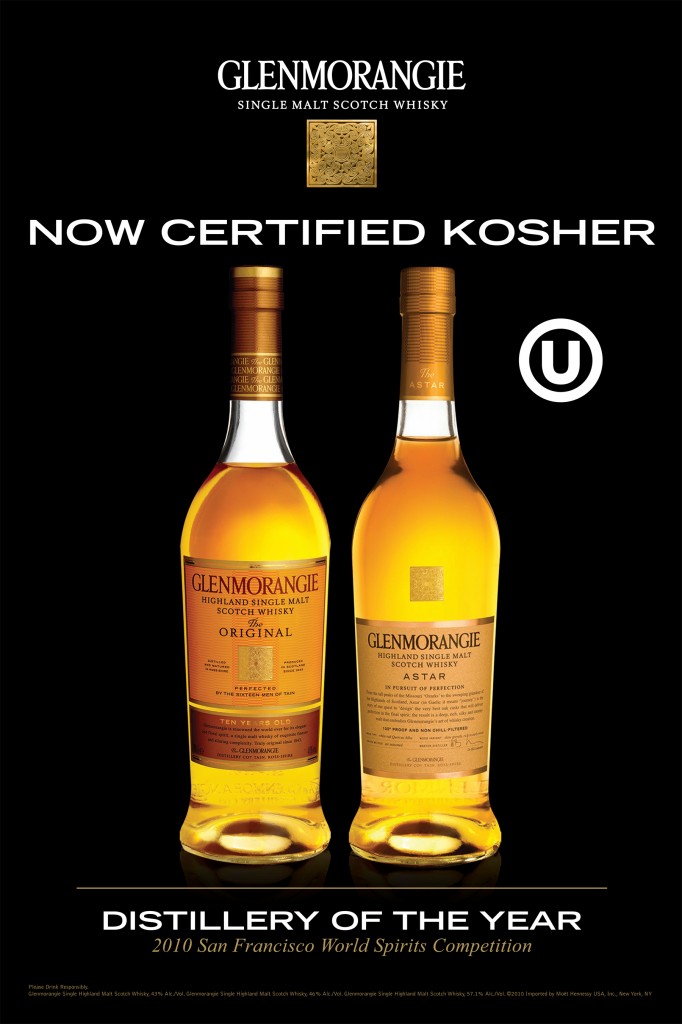 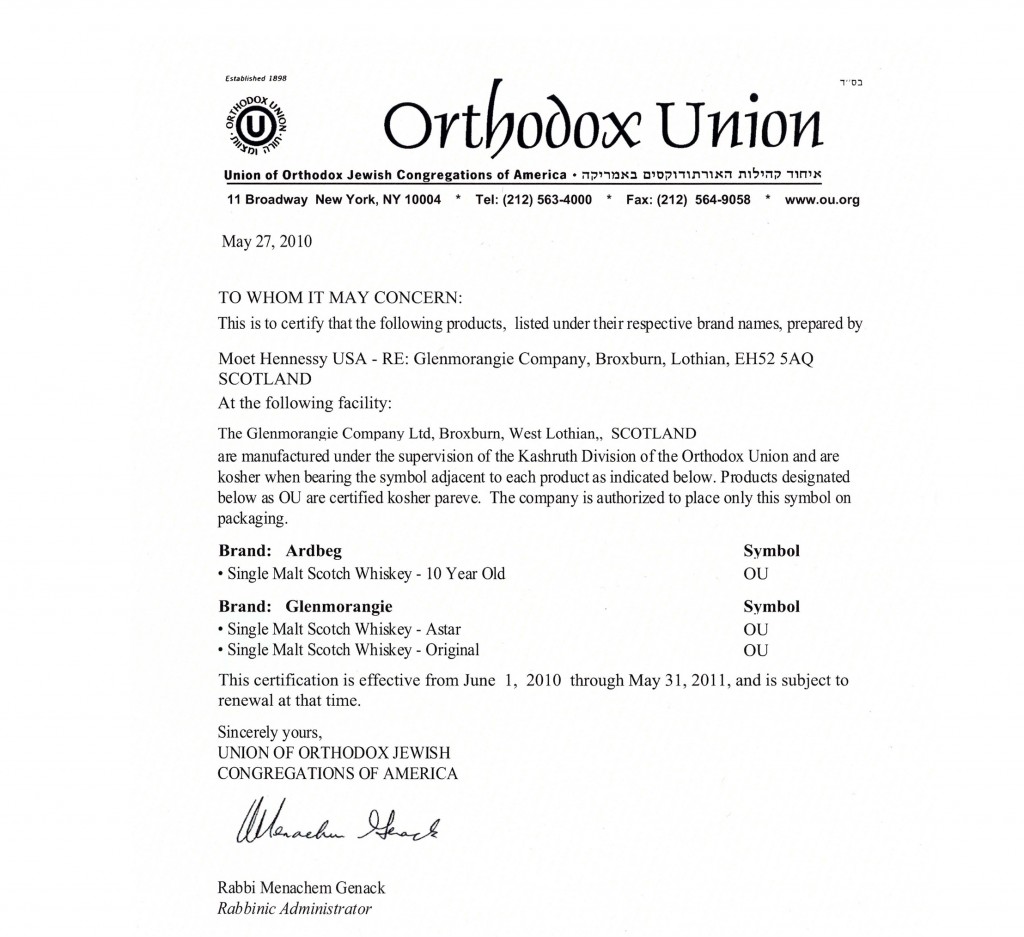 I have come up with a couple of new logos which both Ardbeg and Glenmorangie are free to use (no royalty payments required!):