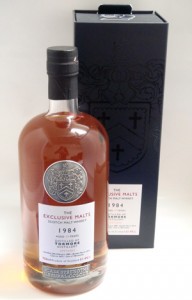 With the exception of having a name that inspired the following statement: having absolutely nothing to do with the whisky at hand, I thought there’s no better time than the present to tell you that I secretly refer to Tormore (a Pernod Ricard malt whisky distillery) as “Tormordor.”

Mordor as in Sauron’s Mordor of Middle Earth.  Sauron as in the  creator of the One-Ring, forged in Mount Doom itself and apparently a lover of fine whisky! 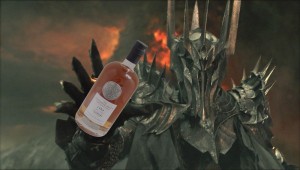 In all seriousness, I have little nicknames for a few distilleries and this “Tormordor” happens to be one of them.

Looking through my blog, I noticed that this is the first Tormore I am publicly reviewing.

Tormore is known to be a *very* spicy malt.  The only ones I’ve ever had were older (like this one) and all seemed to drink younger than their stated age.  Like Sauron himself, perhaps these whiskies are seemingly ageless?

Let us see how this one for the Exclusive Malts range pans out.  It’s a 29yo distilled in 1984 and from an ex-bourbon cask.

On the nose — The ex-bourbon, bourbony character comes straight through to your nose.  Wow.  And, at 29 years old, it does not smell old or tired in any way.  There’s a peppery, spicy liveliness to this whisky.

Light fruits, pears and a touch of baked apple as well.  A nice, well rounded nose.

On the mouth — Very soft and silken in the mouth.  The flavors, however, are fairly shy from the first sip.  Sip # 2:

A bit sour upon initial entry but that subsides to notes of casaba melon, peppery melon juice and heavily honied baklava (thought not as nutty as I found on the nose).

The mouthfeel is that of caramel sauce, warm and sliding down the back of the throat.  It’s really quite a lovely texture.

Finish — Growing and peppery but not overpoweringly peppery in anyway.

In all seriousness, I quite enjoyed this whisky.  A bit shy in flavor to start but a little time is a lot rewarding.  Dare I say, some might like this in the dead of summer and with an ice cube.  Not me though.  Those other people might like to do that…

Special thanks to SF and the rest of the good people at ImpEx for the sample!