After my having an opportunity to taste the Master of Malt 26yr Bowmore Single Cask, I’ve been on the search for more and more Bowmore expressions to taste.  While the MoM bottling is wholly different from any Bowmore out there (or, any whisky out there for that matter), my eyes were forever opened – and now, so is my mouth 🙂

The Bowmore I am about to review is one of the smokiest, dirtiest Bowmores I’ve had to date.  And a nice one at that!

On the nose — Big and smokey, ashy, spent cigarette butts, petrol (gas to us Americans out there…).

Burning rubber like the racing scene in Grease (are we racing for pinks?). 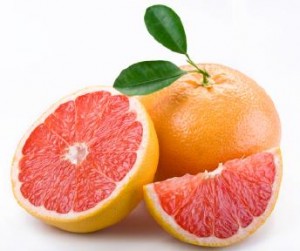 In sum — This is a nice peaty Bowmore.

Very masculine but the feel is that of a 15yr old boy who can grow a G.G. Allin mustache a bit prematurely and is showing off. (I’m 36 and I still can’t get a proper mustache!  Imagine that, a Jew who can’t grow good facial hair.  Oy.)

A good one for when there’s a chill in the air!

Did you know that all of us Jews know one another?  Oh sure, it’s mostly true!  And if we don’t know them, we came pick them out of a crowd – I call it “Jewdar”.  “Jewdar” is a radar for Jews just as Gaydar is a radar for Gay folk.

Ok, I’m really just kidding.  It is true, however, that Gal Granov from Whisky Israel and I do know each other.  He and I are good whisky buddies (even though we’re thousands of miles away from one another).  Gal and I started doing some whisk(e)y sample trading and on our last trade we thought it’d be a good idea if we each sent over a “Mystery Dram”.

A dram that A) didn’t cost a whole lot of money and B) is something that neither of us have had before.  The idea is to try and figure out, at the very least, who distilled the mystery dram in question.  No hints, no nothing.  We had to uncover the mystery using only two tools – our nose and tongue.

As you can see below, we tried to make this as mysterious as possible (you’ll note that the Glencairn shown below has a Glenmorangie logo on it.  This is not giving away and hints.  It’s not a Glenmo.  I just love Glenmorangie whiskies so much, I had to have my very own Glenmorangie Glencairn glass.  Seriously.): 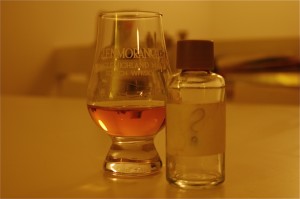 On the nose — A very floral nose, house-planty if you will… Soapy scents and some orange, perhaps a little strawberry too.  There’s a nice little peat backbone here but it’s not overwhelming by any means…  Some curried tomatoes (man… now I want some Indian food!).

Well, I already have an inkling as to what it is but I may want a to chose a Life Line before I blurt out my answer, I better taste it…

On the mouth — The peat is much larger here and it’s a bit dirty.  The mouth feel is quite nice.  Oily, just as I like it.  Sweet.  Simple syrup, salty, green tea… I’m not sure of the ABV but, the attack is not huge here so I’m guessing 43%.

Finish — Sort of a short and thin finish with some orange soapiness coming back.

In sum — Well, my guess on this (which is mostly based on the nose with some of the palate elements to help me fill in the some of the clues) is that this is a Bowmore.  It’s not the 12.  This I know.  But it’s got to be a Bowmore.

I liked it but didn’t love it.  This, to me, is the type of whisky that I’d keep on my shelf (and yes, I’d like to have a bottle of this on my shelf – at all times really) for those moments when you just didn’t know what to pour.  “It’s just a Thursday night so, I’m not going to pour my Glenmorangie Quarter Century” or, “It’s way too hot out, there’s no way I’m breaking out my Lagavulin 16yr DE”, etc…  This is that whisky that can always fill the void.  You don’t need to decide to grab it.  You just grab, open, pour, sniff, sip, swallow, repeat.

I did contact Gal to see if I was right about it being a Bowmore.  Lo and behold, I was right (Woo Hoo!!).  So, which one is it?

You should check and see how Gal fared with the mystery dram I sent him – here’s the link.

This is going to be a quick post.  I’ve got to get up at 2:30 tomorrow morning.  I’m flying out to Anaheim for a trade show (one of the things I truly love about my job).  While I’m out there I’m getting a chance to meet with one of my regular readers – we’re going to taste us some fine whiskies!  Ok, to the Bowmore:

I’ve got to be honest, my first experience with Bowmore was nearly my last.  It was their 12yr old expression and I had it during an Islay tasting.  We tasted the following whiskies that night: Bowmore 12yr, Bruichladdich “Rocks”, Laphroaig 15yr & Ardbeg 10yr.

Looking back, I guess The Bowmore did not stand a chance against the other three Islay expressions.  To add insult to injury, we broke out a little Lagavulin 16yr (which, in my opinion kicks the a$$ of most of the standard expressions out there, be they Islay or no).

Ok, enough crap-talking because I made the very-very smart decision to revisit The Bowmore.  First, I tried out the Master of Malt 26yr single cask exclusive (you can read my review here, and you can buy it here).

Then, I received a nice sample from my friend “O.K.” of The Bowmore 1992 Bordeaux Finish 53.5%.  I tried this Bordeaux finished Bowmore right after the 26yr Master of Malt expression – a world of difference (can you say understatement?). 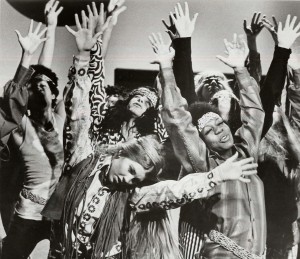 This is a strong nose!), quite smokey (but not like campfire smoke, this is very sophisticated smoke), fruity & winey, quite drying, cured meats, oily

Finish — Very vegetal and the drying continues, more meats and a slight effervescence – Oh, some of those fruits from the nose came back.

In sum — I’m happy I made a return to The Bowmore.  It’s obvious that they’ve got some very interesting whiskies.  I’m looking forward to more Bowmore!  I’m going to make a point of trying the Bowmore 12yr again.  Alone this time to see how it stands up by itself.  That post will come within the next few months.

My day… actually, the past few days for me have be rough.  For this reason to that one, just a lot going on and not enough room in my head to think about it all.  This is not a diary blog for me.  This is a whisk(e)y blog so I’m not going to pour my heart out because, you probably don’t give a rat’s ass.  What you do care about is whisk(e)y and I can dig that.  Shall I move on then?  Yes.

Sitting at home, I have an arsenal of 16 whisky samples – it’s like heaven to me.  Check it:

With so much to choose from, I just did not know where to start.  I think I stood in front of my sample stash for about 25 minutes before I made my decision.  My decision to choose the Master of Malt 26yr Bowmore was partially based on the fact that the only Bowmore I’ve ever had was their 12yr expression and I just did not like it (that review to come – sorry Bowmore folks).  I wanted to try something else by Bowmore and I **LOVE** the Master of Malt 19yr Tomatin (that review can be found here).  The other reason is that I’ve got a serious case of spring fever (like you would not believe) and the reviews I’ve read on this expression reminded me of spring or the flavors I’d like to taste in a spring-time malt.

On the nose – You’d never know this was 53.4% Alcohol By Volume.  It’s very easy to nose, and what a strange nose it is!  Soapy and quite flowery, perfect for this time of year.  Very much like Spider Mums (near exact).  Powdered sugar cookies and nail polish.  Really tough getting past that flowery smell though, quite lovely.  Reading the review of this whisky in Guid Scotch Drink, Jason described a Parma Violets candy smell.  Being that the Parma Violets are a candy found in the UK, not the US, I have no idea what they are but, Jason does, click here to find out what they are.  Hint of smoke floating way in the back. 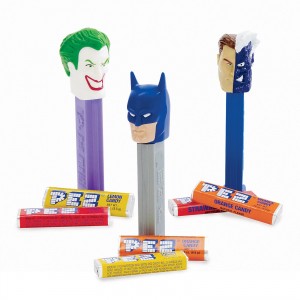 Fun Dip and Pixie Stix.  Is this whisky?  Yes?  Really??  If R.J. Reynolds came out with this product, they’d be in court in no time flat as people would say it’s too candy-like, “you MUST be marketing to kids”.  Thin mouth feel but coating somehow – like the fluid itself is sugar based.  Powdered sugar.

Finish — Long and fruity, like Beech-Nut gum (fruity like the gum, not the length of flavor as Beech-Nut gums lose their flavor right quick!)

In sum — I read review after review about how fruity this stuff was and I just did not expect it to really be as fruity as it was, and, so amazingly like kids candies it really was.  This is not an every day dram for sure.  For me, I can have this once per year or so…  It’s unique, it’s super cool and complex.  The balance is great and I love the flowery nose.  I just couldn’t see myself reaching for this all the time.

A BIG thank you to JJY for the sample!