This story  from Islay concerns an overly ambitious distillery manager and a few members of the islay farming fraternity and serves as an example of greed and its consequences.

Now this particular manager considered himself worthy of promotion to the board of directors and was using every opportunity to impress the powers that be of his worth to the company.

He had hatched a master plan to increase the profitability of his distillery almost immediately and with little actual effort on his part…..increasing the cost of one of his waste products, in this case draff (what is left of the grain after fermentation). It is used for animal food, and thus squeezing more money out of the farmers who depended on the draff to supplement their animal feedstuff.

The farmers were less than pleased with this move and decided to resist such overpayment by boycotting the distillery.

The manager was certain that, given time, they would return begging him to resume supply.

After some time of stalemate between them, the draff began to accumulate until it completely filled the distillery courtyard to the height of a man and channels had to be dug between departments. The manager refused to budge.

Then disastrous news was received at the distillery office: the directors were arriving by plane in 2 days time with VIP’s to tour the site.

Action stations were sounded and all hands were employed to remove the draff to a safe haven up the hill. The mess was cleared with the use of hoses and with brushes and the anticipated visit was declared a success by one and all. 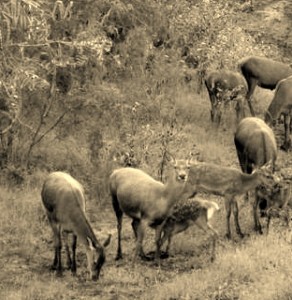 Soon afterwards the farmers were forced into submission and agreed to the manager’s harsh terms.  He told them the secret location where they could collect their animal feed and they set off to do so.  When they arrived at the spot the draff had vanished like snow off a dyke.

The island’s deer popuation had scoffed the lot.

Which just goes to show that THE FURTHER YOU TRY TO CLIMB THE TREE THE MORE YOU SHOW YOUR BACKSIDE!

A big thanks goes out to Bill Morgan for submitting this funny story.  All of his entries/stories can be found here.

You might not know who Bill Morgan is but you should.  Having worked professionally in whisky between 1965 & 1996, chances are if you’re a whisky drinker he’s helped to make the whisky you’ve enjoyed for the past, let’s say, 50 years or so.

I asked Bill if he could give me a quick overview of his history in whisky and he said:

Briefly speaking, I worked for my father in the floor maltings at Cardhu hand turning malt till they closed in the mid sixties and was transferred to Cragganmore where I soon became head warehouseman.

A lot has changed since my time with Highland distilleries (now Edrington) but the sites back then (pre-1996) which I worked in on surveys and as relief manager were Tamdhu, Glenrothes, Glenglassaugh, Bunnahabhain, Glenturret Highland Park and Glengoyne.

On top of this, Bill has a degree in Biology; Membership in the Institute of Biology and Food Scientists/Technologists and had a paper on distillery bacteria published in Institute of Brewing journal (and developed a new agar medium to grow and count these bugs).  So let’s just say, Bill is quite an accomplished guy! (oh, and he was born at Dailuaine!)

As you might imagine, having been literally born into whisky and being in the business professionally for 50 years… Bill’s got some great stories.