Glen Scotia is one of three distilleries located in Campbeltown, Scotland.  This was actually the first Glen Scotia I’ve ever had – Glen Scotia whiskies are hard to come by and, to be honest, I’m not sure I’ve ever seen a non-independant bottling of Glen Scotia (with the exception of one 8yr old & a 14yr bottling).

As I write up this post I’m looking out the window at what will be the first big snow of the season here in Connecticut.  Staring out at the trees as their branches collect snow & watching the squirrels scurry across my lawn with acorns in their mouths… there’s something near perfect about it.  Even though it’s a bit of an odd duck (as you’ll see below), this particular whisky is perfectly suited for the cold weather and contemplative times such as this.

If only my four year old weren’t watching the original Benji movie while my two year old begs for Monsters Inc instead.  The arguing is really getting in the way of the mood I’m trying to stay in.  Maybe I should pour a wee dram of this SMWSA 93.37…

On the nose — Tough to tell what’s going on here – I’m up to the challenge though.

Some mango and a shit ton of pepper!

For some reason I’m reminded of an old friend & girlfriend.  She was actually my first friend (not first girlfriend) ever and I’m reminded of the way her hair would smell after she was working on one of her VW bugs.  Engine oil, perfume and cigarettes.

On the mouth — What the?!  Nothing like the nose.

Parsnips and hot pepper/cayenne candy (if there were such a thing).

Dirty 70’s jeans with knee patches (and the glue that burns a bit when you’re ironing the patches on).

Vanilla creeps up after a minute or so and leaves a bourbony flavor in your mouth.

In sum — One of the strangest whiskies I’ve had to date.  This one, like some others I’ve reviewed, is up there with weirdo drams.  Not for every day drinking but great to be used in a tasting of strange drams. 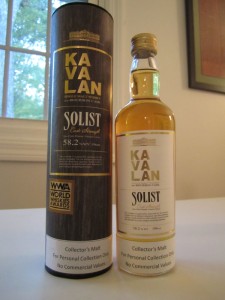 Well, so far, for the Kavalan range, I’ve really enjoyed their King Car whisky.  The “Concertmaster” port finished whisky was good (if a little off balance) and the Sherry cask “Solist” was quite the delicious pick-me-up.

This final “Solist” is also a cask strength whisky.  Kavalan have an ex-bourbon cask strength (this one I’m reviewing today) and an ex-sherry (yesterday’s review).

I am a big fan of ex-bourbon cask whiskies and if they’re cask strength… bonus!

Let’s see what we get:

On the nose – Big bright bourbony nose filled with vanilla and coconut (almost like a Sno-ball.

Also rubbing alcohol and tropical fruits (think pineapples and even a little guanabana).

Birch beer with some high effervescence – it’s all fizzy in my mouth. 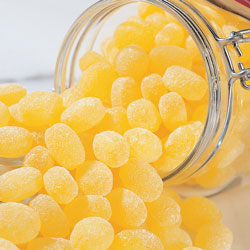 In sum – A straight forward, light and fruity whisky.  Very impressed with the mouth feel – creamier than I expected, but with some lasting fizz to it – right up my alley.

This is a big, young sweet treat.  Early spring in a warming sun is just right for her.

I truly had a lot of fun reviewing these whiskies (and doing so with Gal!).  I look forward to their being more widely available and feel the world is ready for more “world” whiskies.

Be sure to read Gal’s review here.