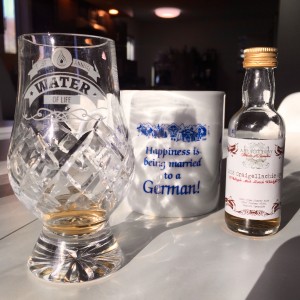 Today’s whisky is the second Craigellachie in the Advent Calendar however this one is bottled at full cask strength by A.D. Rattray. The first one being a 12yo bottled at 46% by Weymss Malts.

A young sherry cask matured whisky (this at 6 years of age) is likely to excite the senses. Perhaps even wake you up – especially given the ABV of 58%. The youngest Craigellachie I’ve had was 8yo and that, too, was a single sherry cask from A.D. Rattray. It was a killer release.

Let’s see what this one does.

On the nose — Peanut brittle masks the most unusual note of bile upon first sniff. 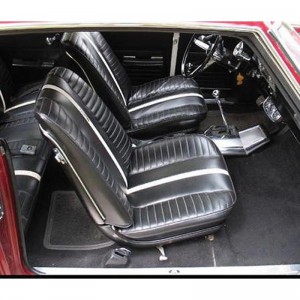 After a minute or so, that bile note goes far away and we are now presented with a series of very strong scents such as: leather wallets, grilled apricots, burnt popsicle sticks, cotton candy, hot vinyl seating in a 70’s Chevy Nova, hot wax, and childhood memories.

I would never have guessed 58% ABV. As youthful as the flavors are, this is a very easy whisky to hold in your mouth. 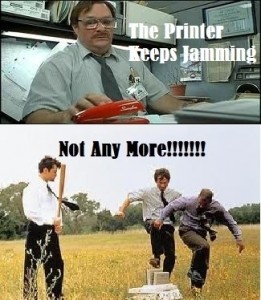 A few more notes before we get to the finish — green bar printer paper, printer ink cartridges, and more hot vinyl seating.

Finish — Medium in length, pears and nectarine pit hold out.

In sum — Surely a fun whisky but one that I think would have benefited from a few more years in the cask. The spirit character is great to experience here. However, more time in cask to develop would have been the best choice in my opinion. It’s worth your time in a line up of various whiskies but nothing to just sit and relax with.

Here we are again; reviewing a store exclusive single cask of whisky.

If you live in the Northeast of the US, chances are you’ve heard of or frequent Julio’s in Westboro, MA.

Store owner and Keeper of the Quaich, Ryan Maloney, is known for having perhaps the most whisky-centric stores in our neck of the woods.  He also has his own whisky society called the Loch and K(e)y Society and bottles whisk(e)y for them on a very regular basis.  Loch and K(e)y are the first and only group to ever have a cask of Balvenie bottled exclusively for them.  (I had a taste once and it was a yummy, yummy thing).

I visited Julio’s a couple of weeks ago to pick up a bottle of George T Stagg and Ryan was nice enough to give me a taste of today’s whisky.  This is a cask of Cragganmore that he personally chose to bottle.

I fell in love with it almost immediately and when he told me it was only $99, I had to get a bottle.  Hey, it was my birthday.  How could I not buy myself a bottle?

So today, I’m reviewing one of my birthday whiskies (happy birthday, again, to me):

On the nose –  A charming start with whiffs of *faint* smoke and lavender.

I have to say, this nose is really, really good.  Again, clean and fruity and very, very confident.

On the mouth – Loads of malted barley and very chewy.

Lively and oily, honied and spiced.

Still quite fruity with touches of light citrus.

Hints of salt but not brine and now some hints of Limon.

Getting back to what I said before, this is a very confident whisky.  Drying and slightly smokey toward the finish.

Finish – A spritz of citrus, a dash of spice and some malt.  It goes on for a good bit here.

In sum – The more I think about this one the more I agree with the thought in my head that this is not the most complex whisky in the world. (My apologies for the horrible, run-on-like, structure of the preceding sentence.)

However, it’s not simple at all.  It’s easily understood and hides very little from you.

This is in my top ten list as one of the finer whiskies I’ve had this year from a rock-solid-satisfying-whisky standpoint.  If there were ever a self-actualized whisky, it would be this one.

Highlands Region – 46%ABV – US price forthcoming but you can pre-order it at Singlemaltsdirect.com for just shy of £36

“Revival” is fitting name for Glenglassaugh’s initial offering of whisky from the newly re-opened distillery.  Many of the details of the make up of this whisky could not be shared.  I do know, however, that there is a mixture of 1st and 2nd fill casks that were then married up in 1st fill sherry butts for 6 months (which adds to the beautiful color that you see to the right and to the flavor of course).  Bottled at 46% ABV, this is a non-chill filtered whisky with zero caramel coloring added.

Congrats to Stuart, Ronnie and the rest of the team at GlenG!!

Thanks, too, to Ronnie R for both the preview and official samples!!

I’m not sure why but when I hear about a distillery re-opening I imagine those reopening to talk much like this (I know if I were them, I would!):

Baked pears.  The youth of this almost-whisky is apparent but so is the cask influence. 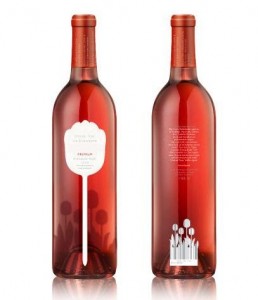 There’s a Rose-ness to this – a semi-dry Rose on a summer day.

There’s a vanilla/creme brulle essence that most certainly came from some bourbon barrels.

On the mouth – Like fresh pear flesh however, this is quite peppery as well. 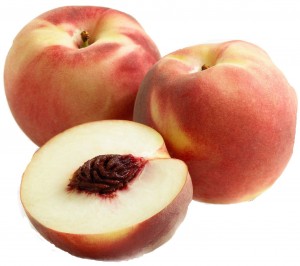 A touch drying along the sides of the tongue.

Finish – Peppery and a bit winey (again, that Rose-like flavor).

Much longer than you’d think given its age.

On the nose –  Very similar to the pre-release but with less of a salty element to it and more of a fruit element.

More of the Rose-ness here.  However, something I didn’t get on the pre-release are notes of cracked black pepper and some stone fruits like apricot and white flesh peach.

On the mouth – More “present” than the pre-release.  Full of pears and dried apricot.

Peppery and effervescent but also, and this can not be overlooked, VERY sweet with an underlying salty quality and a touch of brown spices that offer up what I find to be a very balanced little dram!

The beauty of the Glenglassaugh spirit and choice of casks really seem to compliment each other. 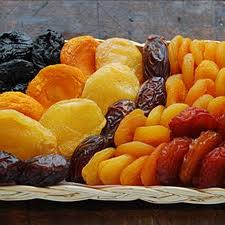 Finish – Drying and full of dried fruits and fresh, unripened ones.  A lasting peppery finish.

In sum – I’m am very impressed with both of the preview spirit sample and the full-fledged WHISKY sample.  I plan on keeping a bottle of this on the shelf.  It’s a no-brainer whisky that is both challenging (there is a lot to tease out of here) but also, just a nice-nice summer dram.  Kudos to Mr. Stuart Nickerson.  Well done, good sir!

In case you’ve not seen it, I had the good opportunity to interview Stuart Nickerson of Glenglassaugh a while back.  Here’s part one, here’s part two – I greatly enjoyed this interview and I hope you do, too! Just over a month ago, the Connecticut chapter of the Jewish Single Malt Whisky Society (or at least a part of it) had the distinct honor of having Andy Hogan of the Arran Malt Distillery host a tasting for us.

Twenty-two people gathered together to taste, experience and explore a collection of Arran’s best whiskies.  We had some people trek a good way to be a part of our tasting.  Joe H from Boston and Stephen M from Providence (and of Malt Impostor fame) both drove about 2.5 hours to join us.  Thanks guys!! Great having you there!  Also, Andy flew all the way from Scotland to be with us – Thank you, Andy!!

Andy did a wonderfully fantastic job taking us through his whiskies; teaching us about Arran as well as the ins and outs of Scotch Whisky in general.  We learned, we laughed, we tasted, we had a blast.  Mr. Hogan brought with him 6 different whiskies: Arran 10yo, Arran 14yo, Machrie Moor (peated Arran whisky), Arran Amarone Cask, a very secret Arran whisky that’s never been bottled (but was totally delicious; perhaps the 2nd favorite of the night) and lastly, this here whisky — an 11yo Single Ex-bourbon cask (first fill).  This whisky was the easily favorite of the night.  I liked it so much I bought two bottles!

On the nose – Intense notes of banana peels and salted green apple skins.

A bit of nail polish remover (in a nice way).

All of these notes are incredibly strong — this is a no holds barred nose.

I’ll have to take this one by the horns and ride the rodeo.  Next up, the taste…

On the mouth – Chewy, thick, oily mouth feel with loads of warmed caramels and gooseberry jam.

Back to the grassy notes (fresh grass) but there’s a great note of sassafras in here – hey now!

Back to the savory chewy/candied notes: candied walnuts, toffee and salted caramels.

An intense malty & oaky note creeps in (not sure how I missed it from the start.  It basically slapped me in the face just now).

A good deal of vanilla as well.

Finish – Very long with notes of malt and the sassafras I got on the palate.

In sum – While delicious, this whisky is not to be taken lightly.  I might suggest it be diluted by a little bit of water if you feel you need it (however it is not required).  To be enjoyed at dusk just as it starts to get a little cooler and almost sweatery. 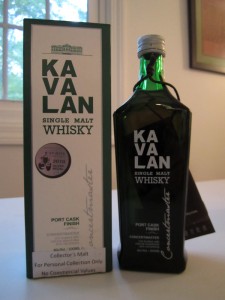 Before I got into whiskies, I was a true lover of port and madeira wines.  The fruity spice of port and the earthiness of madeira turned me on like a light bulb.

Ok, moving on.  Loving port & madeira like I do, I often find myself seeking out whiskies which are finished in these types of casks (such as the Balvenie 17yr Madeira Cask or the Angel’s Envy Bourbon).  When I opened up my sample package from Mr. Chang, I was excited to see a port finished whisky from Kavalan.

On the nose – Lightly spiced with wafts of mangos.

Fresh pears and over ripe pineapples. 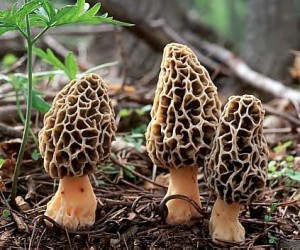 A youthful nose with some hints of mushrooms and soured milk – earthy.

On the mouth – Hits you hard with loads of spice. 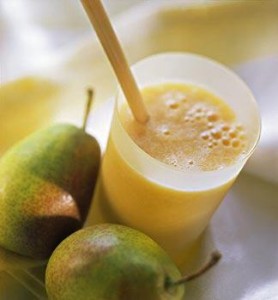 Good mouth feel but the flavors are a bit elusive.

A touch of honey.

Finish – Wheat biscuits, side of honey and butter, shortish.

In sum – An enjoyable nose on this whisky.  The fruitiness was a welcome thing.  I was a bit let down by the flavor side of this – a touch off balance (or maybe I’m a bit off balance here!) from the nose and, quite honestly, I was hoping for a bit more from the flavor/palate.  The finish was quite nice just a bit too short.