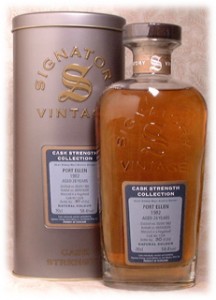 An out of the blue voicemal:

Marshall (this voicemail is completely paraphrased): “Hey Joshua, Marshall here, just checking to see if you might want a sample pour of some Port Ellen the LASC just got”

I was busy setting up a tradeshow booth so I sent a text:

Joshua: “As ‘The Dude’ would say: Does the Pope shit in the woods? Hell yes!”

The back and forth goes on from there but there are too many expletives and references to “Jewish English” that would make my reproducing of the entire transcript too risque for the JSMWS blog.  No shit.

Special thanks to Marshall and the LASC for the “bad-a$$ F&#$ing great pour” sent to me!

Chamomile tea and a bushel of hay on a very, very humid summer’s day.

After a while the bourbon influence is very noticeable with scents of cinnamon and vanilla even fresh corn.

After this, it gets a bit dank and dewy.

On the mouth — The ABV is barely… wait a sec.  Wow, this is really…really heating up on me.

Oh crap!  This goes from oily, soft and sweet then onto being thin, hot and fiery in a matter of 6-7 seconds…

Let’s have another go at this:  Grassy, earthy, flinty, almost electric.

It starts off with freshly bitten plum then moves into pink lemonade.

This is evolving with every single sip.

Soapy, like on the nose and growing into sugary tart Sweetarts.

In sum — Nicely balanced.  I really dug the way the flavors exploded and evolved with every second.  A late summer’s night dram if you have a shit ton of cash to spare!  Very enjoyable.  For the $$ tag on this one, I can spend less on another whisky that can also be enjoyed on a late summer’s night.