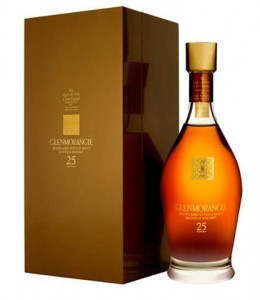 I was hoping to do three ti-pity-top shelf whisky reviews before Passover (the Laphroaig 30yr, The Glenmorangie Quarter Century and one other) but, for many reasons, plans have changed and I am only able to do the two.

It’s no secret that I am a huge fan of the current Glenmorangie range.  I think it’s nothing short of brilliant (with an exception or two; I’ll get to that in a later post).  If you’ve stayed away from Glenmorangie in past years, now may be a time to return as they seem to have been born anew.

Today, I will be exploring Glenmorangie’s top dog – The Quarter Century.  Twenty Five years of maturation for this fine-ass fluid.  This whisky has been matured in an array of barrels: Bourbon, Sherry Butts (tee-hee :), my inner 9 year old always chuckles when I see the word butt) and Burgundy Casks.  This being the case, you can imagine that there’s going to be some depth and complexity to this whisky.

On the nose — Even at 43%, my nose is getting a little tickled (and I pride myself on having a nose of steel), refreshing, quite the fruit basket – melon, quite some apricot (G-d damn, I love smelling the apricot in a whisky and this is just so, so nice), honeyed toast, a slight whiff of smoke (ever so slight but there nonetheless), a dash of salt (maybe salted macadamia nuts?), jammed fruits, plums & prunes – where’s my rye toast right now – I don’t want to drink this, I want to eat this.

Palate — Oh, wow.  Really wow.  Succulent & lush, quite minty (not the full flavor of mint but the cooling effects of mint), thick creamy honey, almonds, my mouth feels like it’s wearing a hand knit whisky sweater – warming, yet cooled by the mint – quite paradoxical.

Finish — Ever so slight smoke creeps back with a bit of oak and vanilla, honey and back to some of the fruits – now some ginger??  If I didn’t have the natural reflex to swallow, I could keep this whisky in my mouth forever.

In sum — Tasting this reminded me of the time my friend Jeff tasted the Ardbeg Uigeadail.  We were at Whisky Fest in NYC and I brought him to the Ardbeg booth and he tried the 10yr, Corryvreckan, Supernova and the Beist.  Then, they poured him some of that ever so special Uigeadail and he paused for a moment and said, “Josh, I think I just found out why I was born”.

While the Uigy & Glenmorangie Quarter Century are WORLDS APART, I can say I had a moment just like that tasting this stuff.

This is the type of stuff that you break out when your kids graduate from college, become a Bar or Bat Mitzvah, when that mother-in-law you hate passes (if applicable) ;)– in other words, enjoy this at the most special of occasions.

You know, after having this stuff (and re-reading what I just wrote above), I was reminded of a great scene in Pineapple Express where James Franco’s character was explaining to Seth Rogan’s character exactly what Pineapple Express was.  Here’s the pot version of the Glenmo Quarter Century for me (Disclaimer: I do not smoke, nor do I promote the smoking of marijuana, I just dig stoner flicks and this scene is awesome!):

So, I’ll be quite honest when I say the only reason I purchased this is because it said “Highland Park” and it was a $35 dollar bottle.  You may have seen in a previous post that the best dram for me in 2009 was the Highland Park 18yr.  I am a devotee of Highland Park and, for me, everytime I have a sip of their nectar I have a Shehecheyanu moment.  Highland Park whiskies are that special for me.

On top of that, John Hansell of Malt Advocate gave this particular expression a nice little review.  I’ll pay $35 for an 83pt whisky (especially if it’s Highland Park)!! You can check out John Hansell’s review here.

Without any further ado, here are my notes on this fine little dram:

Initial Whiff — Very delicate and quite briny, almost like a slightly intense Scapa 16yr (that review to follow in the coming weeks), oaky, hint of fried pineapple, honeycomb breakfast cereal (does that exist outside of the US??)

Palate — Increasingly fruity, tropical, syrupy mouth feel (can this really only be a $35 bottle??), ever slight earthiness (can’t place it, but the feel the flavor gives me is that of things growing in the springtime – it must be the youthfulness of the spirit), sweet onion, this is a punchy little dram.

Finish — Medium length, just as biting as you’d expect from 43% (though I would have loved to have tried this at 46%), after a minute or two I notice a stronger smokiness in my mouth I did not detect earlier.

In sum — This is not a very “Highland Park” Highland Park.  It’s quite different from the 12yr, 15yr or 18yr.  And while it’s not the most spectacular dram I’ve ever had, I can see myself reaching for this in an instant.   This is a really nice every day dram though, no doubt about it.  Quite well done and oh so worth the price spent (if not more – though don’t tell the kind folks at MacPhail’s, it’ll be our secret.  Just you and me. Ssshhhhh!!)

Continuation of the “In sum” portion of this post — So, I pored myself a nice healthy portion (my guess is about 6.5cl) and I tend to only use the first 2cl of a dram for review.  I’m about 4cl in and, wow, just a really nice dram.  A nice little cracker and so very perfect for the springtime or a cooler summer day.  I’ll take this in place of a cold beer any day – extremely refreshing!  Heck, I’d take this over water (this is the “Water of Life” after all, right??)