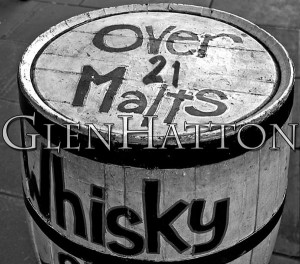 Last week, as you might have read right here and here, details of the GlenHatton were finally revealed.

As a quick reminder, I created a dregs bottle of whisk(e)y called The GlenHatton.  It is made up of the following whiskies (in no particular order or quantity):

After creating this dregs bottle I sent a message out to friends via the Jewish Single Malt Whisky Society Facebook page asking if anyone wants to get a taste of the stuff.  I had enough for 8 samples and got a taker for each one!  Based on the quick response and people’s seemingly burning desire to taste the stuff, I thought it’d make for a great series of posts!

What do I think of the stuff?  Well, let’s see:

On the nose – Smokey for sure but, not off the bat.  The smoke is waiting on the sidelines.

Fruity and floral (think pineapple, hibiscus and bananas of the bruised variety).

Very, very peppery – both black and white, like a nun in a habit (with a habit).

The fruits come back and smell juicy.

On the mouth – Peppery attack followed by threads of smoke and creamed corn.

I think Jason nailed it with the cumin note.

The fruits are gone now yet some honey remains.

In sum – All in all, a happy accident.  No complaints here.  I do remember, at one point, that this stuff tasted awful (after I added in the four bourbons).  Once some of the peaty whiskies went in, it all turned around for the better.

When to enjoy this?  Well, I’ve got enough for one more sample to give away.  If you want, let me know and I’ll send you some.  First come first served.  You can email here: jewmalt@yahoo.com

Update – it took about 7 minutes but, the final sample of the GlenHatton has been claimed.  Congrats to Chris K of New Jersey!

As mentioned in the last GlenHatton post it was Jason Johnstone-Yellin who guessed the most numbers of whiskies in the GlenHatton.  That being said, he wins a free whisky sample.  So, what does Jason win?  A 5cl sample of some 18yo,  single cask,  Cask Strength Hanyu bottled by the Number One Drinks, Co.  This 18yo Hanyu was further matured in new Japanese oak.  It’s an odd duck but I’ll tells ya, it’s damn good stuff.  Congrats, Jason!

Thanks again to everyone who participated in this fun experiment.  Twas a blast!