Islay region – 50%ABV – 50ml bottle – Distillery only and sold out within a day or two.

Back in April of this year (or last year if you’re on the Hebrew calendar), you might remember that I started a little series called “Islay Distilleries Explained Through Rock and Roll Comparisons.”  The first in that series was my comparison of Bruichladdich to the Sex Pistols.  Basically dubbing them “The Punk Islay.”

Well, it would seem that Bruichladdich really took to that comparison as they used the idea for their bottling for the Queen’s Jubilee.  A 20yo Bruichladdich, Cask 516/R02. 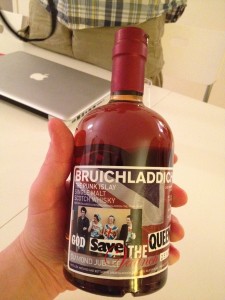 I am quite honored that they the took idea as far as they did.  Cheers ‘laddies!

G-d Save the Queen!

The funny thing about this bottling is that I had no idea it was happening.  My friend Stephen (of Malt Impostor fame) just happen to be on Islay at the time Bruichladdich released this bottling and he decided to pick me up a bottle as a gift.  Kissmet.  Thank you Stephen.

Stephen also picked himself up a bottle and was nice enough to share a sample with me.  Thank you again, good sir!

On the nose –  Bright and very rich red fruits mixed with bow rosin, old wood and what I’d swear is soy sauce.

Quite unique from the new “Laddie Ten” story.  It’s a 20yo whisky so its obviously from older stock but there’s also some cask trickery in here adding to both the complexity of the nose and the balance in the initial scent profile.

Can you guess that I’m digging the nose? 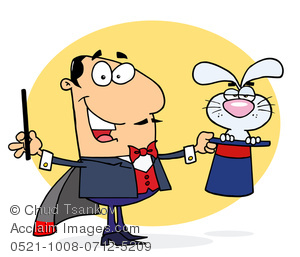 On the mouth – Presto-chango, wine cask influence here for sure.  You silly cask, you didn’t tell me anything about all of this on the nose!

I need to say that the mouthfeel is ooey and mouth-watering.  There, I said it.

Somewhat reminiscent of the Black Art II with the red fruits, wine influence, etc… no detection of new wood like I got in that one though…

In sum – The nose told me, for the most part, Ex-Bourbon and the initial flavor told me wine.  It’s like there’s two different whiskies here.  Two stories.

While I loved the nose and enjoyed the overall flavor profile, the two together seem off balance.  This said, I would never, NEVER say no to another dram of this juice.